Boxing lessons are helping patients punch back at Parkinson’s disease 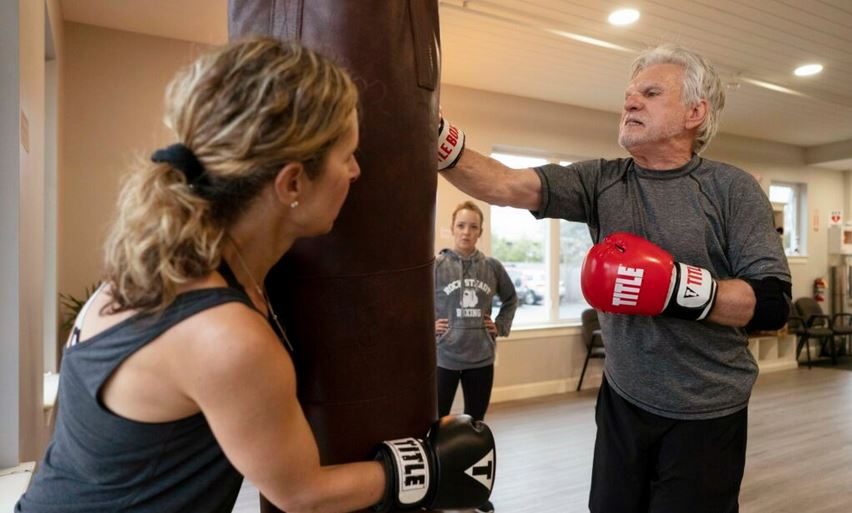 We have only begun to scratch the surface of what the human mind and body are capable of. That being said, there are still so many helpful tips and tricks that science is testing to rid the world of debilitating diseases. A new study is showing the benefits that boxing lessons are having on patients with Parkinson’s disease. It’s called Rock Steady Boxing and you should totally check it out.

Henry Bourgeois was wrapping up his regular physical exam with what he thought would be a clean bill of health. Then his doctor asked him to take a walk down the hall.

He saw what Bourgeois hadn’t noticed – his stride was small and his natural arm swing was gone.

“I came back into his office and he said, ‘I think you have Parkinson’s disease.’” Bourgeois said. “It was bizarre. I was just stunned.”

Yes, boxing. Bourgeois is one of about 150 people in Maine – the vast majority of them elderly – taking part in Rock Steady Boxing classes in an effort to stave off the debilitating effects of Parkinson’s disease.

Participants hit a heavy bag with jabs, hooks and uppercuts. They snap off lefts and rights on a speed bag. There isn’t any sparring or contact, but as certified personal trainer and boxing coach Tia Parady puts it, the 75-minute, twice-weekly workout is “purely what you think about boxing. Jump-roping, pushups and conditioning drills like you see in the movies.” 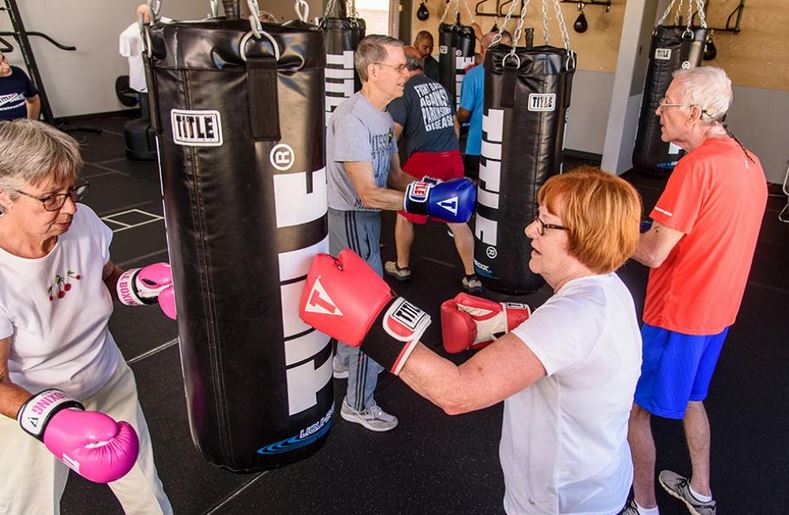 Dr. Michael Kleinman, a movement disorder specialist at Maine Medical Partners Neurology in Scarborough, said the boxing program is effective because it addresses several symptoms of deterioration associated with Parkinson’s, including slowed movement and restricted range of motion. Having to move feet and hands at the same time while counting punches encourages what Kleinman called “motor multi-tasking, which is very hard.”

“Hitting a bag as hard as you can and then swivel around, it’s about movement and limbering up your muscles. Left by myself my muscles are going to cramp up and I’m going to be in a wheelchair,” Bourgeois said. “I just want to live to be 95 and be able to walk down the street. That seems like a modest goal. But it’s impossible with Parkinson’s unless you do something about it.” 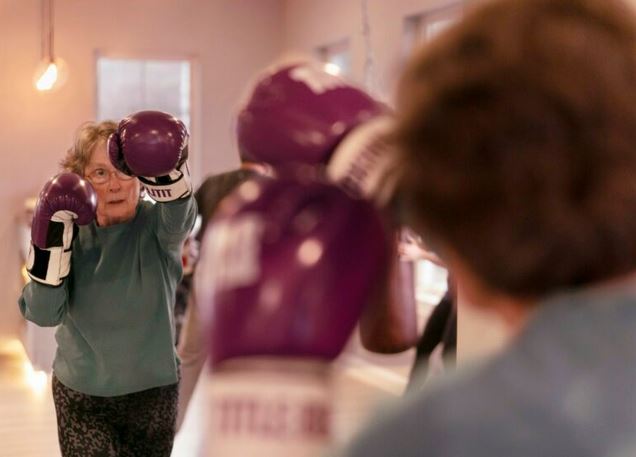 The Parkinson’s Foundation estimates 4,000 Mainers are among the nearly 1 million Americans with Parkinson’s, a progressive, degenerative neurological disease that has no cure. It is caused by an imbalance of chemicals involved in transmitting signals from the brain, affecting motor skills. Early symptoms are often uncontrollable tremors in fingers, hands and feet, changes in voice, reduced range of motion and often a stooped posture. Parkinson’s itself is not fatal but late-stage disease complications like difficulty swallowing and frequent falls can be deadly.

For Parkinson’s patients, the goal is to slow the decline for as long as possible. Exercises like yoga, tai chi, ballroom dancing and walking have long been accepted as viable ways to slow progression of Parkinson’s disease. But there is growing scientific evidence that exercising with enough intensity to break a sweat is better.

“I’ve found that I have more strength. I feel I’m working hard,” said Jeanne Blatchford, 81, a petite woman with a pronounced stoop but an uncanny ability to strike the padded mannequin nicknamed Bob right on the chin. “I have to concentrate on whether I’m using my left hand or my right hand.” 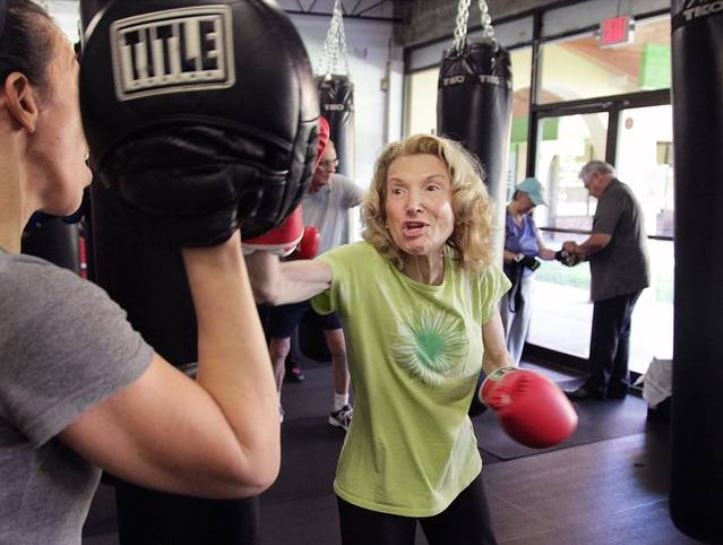 Blatchford and Bourgeois take part in classes at Coastal Rehab in Cape Elizabeth, one of five Rock Steady Boxing locations in Maine and the only one offering classes at four levels to accommodate clients of different physical capabilities. In Level 1 the boxers’ warm-up routine would be challenging for most adults. In Level 4, which includes some people in wheelchairs, the warm-up routine is done while sitting. The pace and difficulty of the activities are modified for each level.

Blatchford and her husband, Lynd, make the trip from North Berwick to Cape Elizabeth twice a week for a Level 3 class. Lynd serves as his wife’s “corner person.” He helps her put on the boxing gloves and walks alongside in case of a fall.

“I see my wife almost plateauing, which is a much more optimistic view,” said Lynd Blatchford.

Rock Steady Boxing was founded in 2006 by Scott Newman, an Indiana man who was diagnosed with early-onset Parkinson. In 2012, an affiliate program was created, with coaches gaining Rock Steady certification by attending training sessions in Indianapolis. Seven years later the movement has over 700 affiliates internationally.

Mid Coast Rock Steady, located at the Bath YMCA in partnership with Mid Coast Hospital of Brunswick, was the first program in Maine, opening in December 2016. It has up to 60 participants. The state’s other Rock Steady Boxing classes are located in Lewiston, Ellsworth and at the Boothbay YMCA.

“We’re seeing significant changes in our people and their quality of life,” said Rachelle LaHaye, a coach at the 25-member Friends in Action Rock Steady in Ellsworth.

Because it is considered a maintenance exercise program, Rock Steady fees are not covered by insurance, said Mimi Delisle, a coach and occupational therapist at Coastal Rehab. Coastal Rehab charges $99 per month ($89 monthly with a 12-month membership). Mid Coast Rock Steady offers the class free for YMCA members and a senior membership costs $41 per month. 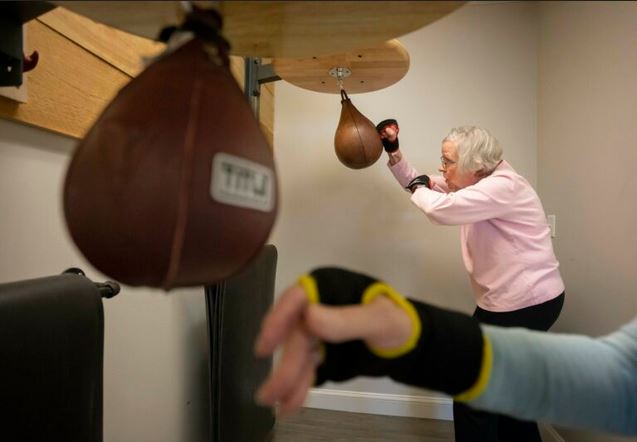 “It’s worth it,” said Susan Anderson, 70, of Cumberland, a boxer and enthusiastic advocate for the program. “It works because it’s forced, focused and intense. I’ve gotten better on my feet and it helps my core. You’ve got to get strong and stay strong. Dealing with Parkinson’s is like swimming against the current and the current is moving faster than you are.”

The quick growth in participation at the Cape Elizabeth program – which started in April 2018 and now has about 50 participants – has been bolstered by referrals from area neurologists, including Kleinman. He said his patients are also benefiting from the boxing program’s ability to make the hard, vigorous workout enjoyable.

“It seems to be a lot of fun for the people doing it,” Kleinman said. “The biggest issue with Parkinson’s is getting people to stick with it and this program is enjoyable enough for people to be able to go back. And the boxing element sort of instills a sense of fighting against Parkinson’s.” 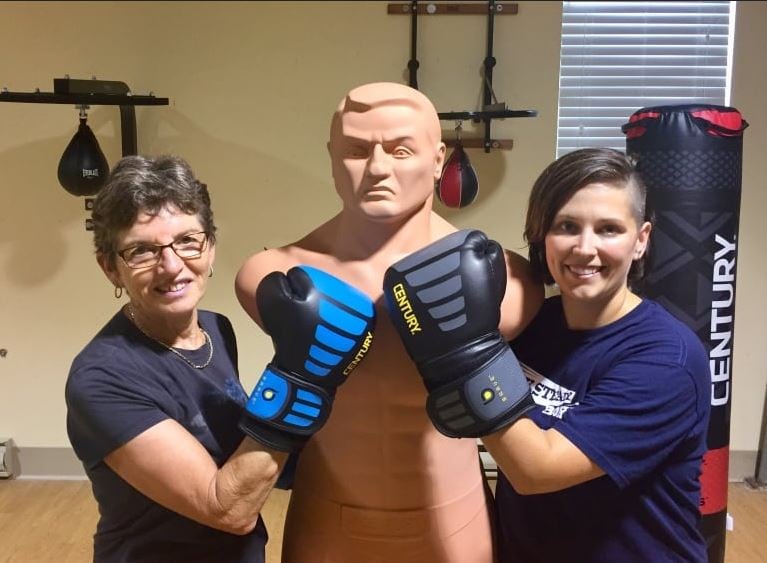 According to the Parkinson’s Disease Foundation, emotional symptoms include depression and irritability.

“When you’re hitting something, it feels kind of good and when you say to people you’re boxing, they look at you and say, ‘Oh, you’re doing something about it,’” said Jim McNeil, 64.

“All of us have an inner rage we don’t like to touch because we’re socially conditioned not to,” said David Morin, a retired physician. “But now you’ve got permission to hit it. Hard.”

Morin, 72, of South Portland, is both a boxer in the Level 1 class and a volunteer coach for Level 2. As a coach, he often “catches” other people’s punches while wearing large padded mitts.

“I like the people and I get results. I just had a six-month evaluation and my physician said, ‘You’re stronger, more flexible and quicker than you were six months ago,’” Morin said. “I knew that I was improving. Watching the people and being on the back end of the mitts, their punches are stronger, they have better form and their balance is better. I think they feel the same way.” 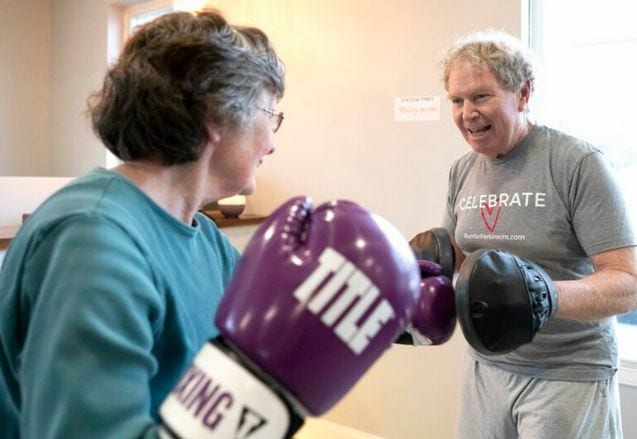 “It’s camaraderie,” said Joe Martins, 69, of Cape Elizabeth. “The camaraderie here, right away, just blew me away. We help each other out.”

Martins is one of the livelier members of the Level 1 class, despite a pronounced tremor through both arms. He’s lived with Parkinson’s for 11 years and makes it his mission to incorporate newcomers and organize additional activities outside of class.

“This is a disease you’re going to have for the rest of your life,” Martins said. “That’s the one hump, as a group, that we try to get over. What you’ve got to do is stay focused on something that works. Even if you get two minutes of non-shaking, you’ve got to look at it as you’re doing everything you can to get that own peace of mind for your well-being. If you don’t do that, you’ve lost.”

For Bourgeois the feeling of loss he experienced when first diagnosed with Parkinson’s has been replaced by pride.

“It’s funny because I was never athletic when I grew up and I never took a boxing class in my life, so I didn’t know what to expect,” he said. “It turns out, what I’m able to do is box. Which is like a miracle to me.”