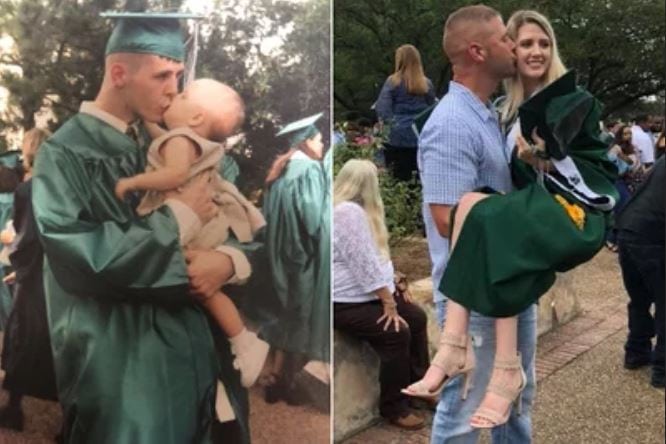 Pictures are magic. They allow us to relive the emotions of special moments in time. So when one father-daughter duo posted a recreated graduation shot on social media, hundreds of thousands of strangers got to relive that moment too, and it’s just adorable.

Graduation season is upon us, and you know what that means – students everywhere are sharing photos of their Majical Moments. But there’s one father-daughter duo’s celebratory shots that are making their way through social media again — thanks to a viral throwback photo that was recreated.

Tori Roach, 19, shared a sweet picture on Twitter of her big day in May 2018 as she graduated from Huntsville High School in Texas, and used the opportunity to honor her father. In a throwback shot, the little girl is shown as a baby in her father’s arm as he celebrated his own graduation from the same school in a green cap and gown.

Alongside that shot, the recent high school graduate shared a photo of herself again perched on her father’s arm as he planted a kiss on her cheek.

“18 years later,” she wrote, including a pair of emoji.

“For everyone asking, yes this is my dad, he’s 37, and no he isn’t single,” she wrote in a follow-up tweet. “I have another sibling on the way.”

“I’m from a small town and nothing like that ever happens over here,” Roach tells PEOPLE. “I didn’t expect it to blow up like that! Once it started happening, I was like, ‘Oh my gosh!’ I called my family and I was like, ‘Everyone’s sharing the pictures!’ ”

It garnered attention again over the weekend, as internet users everywhere scrolled through the onslaught of graduation pictures. Roach says it racked up thousands of additional retweets.

“I woke up and I had a ton of notifications … People had started sharing and liking and commenting all over again,” Roach tells PEOPLE. “My dad was really proud. We’re from a small town, so nothing like this really ever happens. And he was like, ‘That’s so cool!’ “

Roach — who lives with her father Dennis Roach, stepmother Jamie Roach and new baby brother Silas Roach in Huntsville — says her family found the old photo last year as they looked around for baby pictures of Roach to display at her graduation party.

It was her aunt’s idea for the father-daughter duo to recreate the photo, she says.

She adds: “It brought me and my dad closer in a way because we could share that moment, and I feel that not many other people get to experience that.”

Now, Roach is a student at Sam Houston State University and says she plans to recreate the photo again when she graduates from the school in 2022.