Tyler Trent was more than just a super-fan of Purdue, he was a human that celebrated the very thing he loved every day – Purdue football. He did it with passion and inspired many people around the world while doing it. Trent finally passed from a rare form of bone cancer after five years of showing the world his fight and courage. Although Trent never played football for Purdue, people say that he is and always will be the heart and soul of the football program. There was a ceremony on Wednesday 3/27 to announce that Gate E will be now known as the Tyler Trent Memorial Gate, which will ensure his legacy forever, if there was any doubt. Passion is such a powerful thing. People fall in love with passion, because it reminds them of what they forgot long ago. Tyler had that magic and will always be remembered for it. Don’t ever let anyone tell you that one person can’t make a difference, because it’s people like Tyler that will prove them wrong. Enjoy the full story.

Mitch Daniels stood nearly 25 feet away from the exact spot where Tyler Trent set up his tent about 19 months ago.

On that September evening — the night before Purdue’s football team would face nationally ranked Michigan inside a packed Ross-Ade Stadium — Trent and his longtime friend, Josh Seals, were on a mission to camp out.

They wanted to be the first students to walk — or in Trent’s case move as quickly as he could down the steps on crutches — through Gate E and grab a front row seat. Their plan, which was pieced together in less than a week, was executed as well as Jeff Brohm’s trick play against Ohio in his first home game two weeks earlier.

The duo — with their bodies covered with gold paint and Trent wearing gold and black overhauls — reached their destination and all was well. 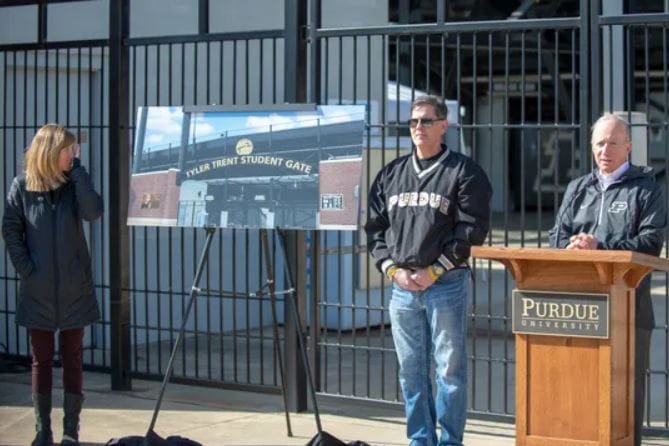 You know Trent’s story by now. The nearly five-year battle with a rare form of bone cancer (Osteosarcoma) finally took his life Jan. 1. But the Purdue graduate didn’t leave us without showing everyone his fight and courage, bringing the university, the athletic department and the fan base together for an emotional journey.

No one will forget where they were on Oct. 20, 2018, when the Boilermakers beat No. 2 Ohio State, the day the nation and the world learned of Tyler’s story. Remember, Trent predicted the upset. 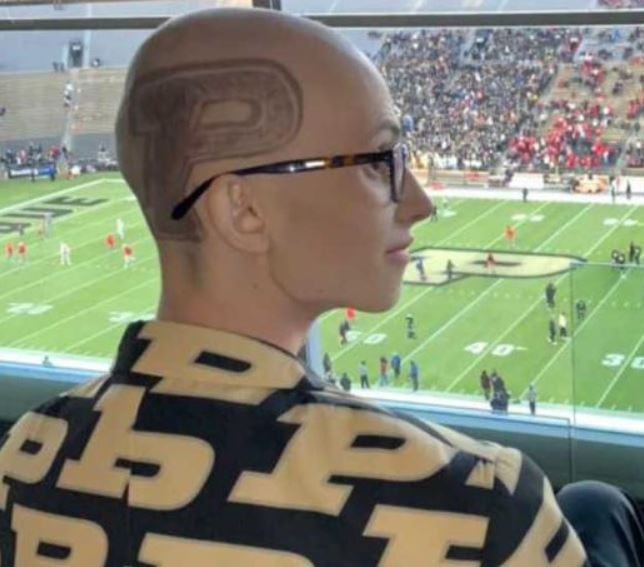 Wednesday’s ceremony to announce that Gate E will be now known as the Tyler Trent Memorial Gate ensures his legacy forever, if there was any doubt. Trent’s signature — “T2” — will sit above the arched gold and black sign, which will be installed before the start of the 2019 season.

Everything about Wednesday’s announcement fit nicely together.

The sun-splashed morning with the hint of a slight cool breeze. The location just steps away from Trent’s tent as the Purdue president made his remarks and near where a plaque will sit on the Ross-Ade Stadium brick façade with details why this young man was special.

The participants, including Tyler’s parents, Tony and Kelly, and other family members. The recipient of the inaugural Tyler Trent Courage and Resilience Award — freshman Sean English — has his own compelling story and is well worth the scholarship coming his way.

“I want to be Tyler Trent when I grow up,” said English, whose coursework includes exploratory studies. 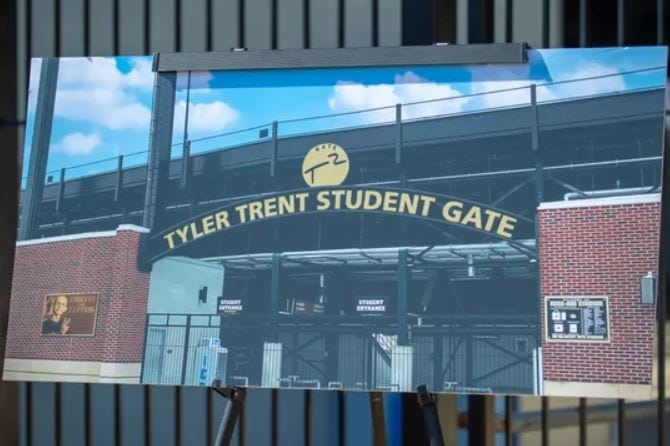 English lost his right leg in a car accident nearly two years ago, helping a stranded motorist on the side of the road. The Michigan native had a track scholarship lined up at Purdue.

English fit the theme of the day as far as the right person to jumpstart Trent’s scholarship.

“I want to make this known and make this about Tyler Trent. Today is his day. This is his gate. It’s an honor to be attached to his name,” said English, who was articulate and thoughtful with his remarks.

The support in the crowd demonstrated from Purdue coaches, members of the football team, other athletes, students and those in the community shows the pure power of Tyler’s impact. 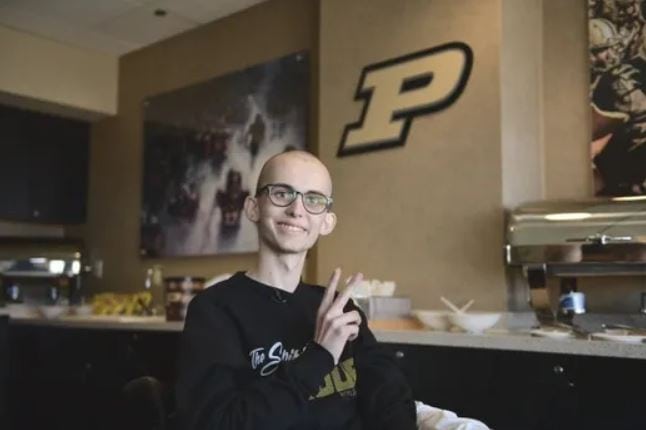 What Purdue is doing to honor Trent feels and looks right. The discussion of a statue didn’t fit who Tyler was or how he would want to be remembered. This falls in line with his values.

“It’s Tyler,” Tony Trent said following the announcement. “They did a fantastic job. This is Tyler.”

It’s not overdone. It doesn’t feature pomp and circumstance. It’s subtle, humbling and has the right tone. The Carmel native, who was just 20 when he died, used his platform to raise awareness for cancer research and that was his main motivation. He never made his situation about himself.

All this for a student who never played football and wasn’t associated with the program until he became an adopted son and honorary captain. He was — will always be — the fabric of the football program and someone the entire campus will never forget.

“Words are inadequate,” Kelly Trent said. “It’s absolutely unbelievable. I can’t help but smile how much Tyler would love it and how honored he would be at this. It’s outstanding what they’re doing.”