There are still so many good people out there doing the right thing. The younger generation gets a bad rap for not caring, and being glued to their phones. Hopefully stories like this will change people’s perspective. Let’s not be so quick to lump all teens into one category – these boys are heroes!

A group of five teenage boys in Caldwell, Idaho, are being hailed as hometown heroes after a video of them picking up an elderly man and bringing him home to clean his wounds went viral on Facebook.

Victor Ornelas, Isaac Hernandez, Diego Ramirez, Devan Ornelas and Josh Sorg were on their way to play basketball when they drove past Jose Gomez, an elderly man with a walker who had fallen to the ground.

To be sure he was safe, the friends walked Gomez back to his house and came inside to check him for injuries.

“His knee was bleeding,” Hernandez said. “And so we grabbed napkins and we put alcohol on and we cleaned him up.” 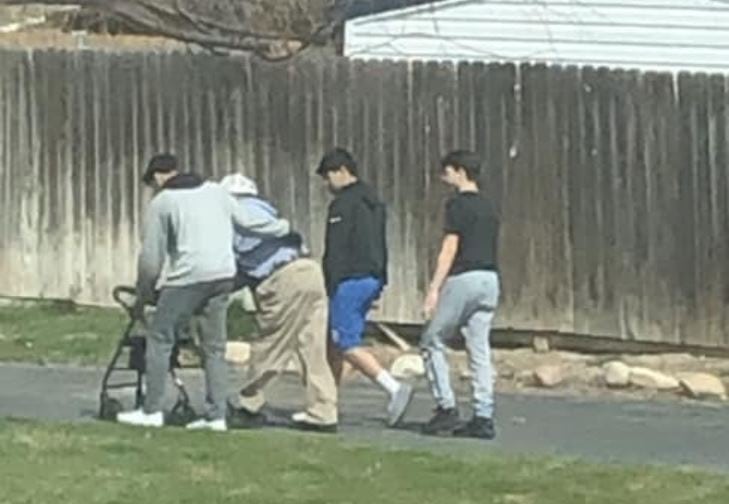 Little did the boys know, however, that a neighborhood woman named Erika Tovar had been watching and filming the good samaritans in action. She published the photos on Facebook on March 26.

“I had dropped off my kids at their cousin’s house, and on my way home I spotted a elderly man walking,” Tovar told Yahoo Lifestyle. “He was very stable, so once I had passed him I kept my eye on him in my rearview mirror, and sure enough, he fell.”

Tovar said she quickly made a U-turn, but so did the car behind her. “So we both parked and [the boys] jumped out pretty quick and helped the old man up,” she said. “I figured there were enough people to help, so I just started snapping pics.”

Tovar’s post eventually made its way to the people who operate The Sweet Spot Bakery nearby. When owner Kathy Plaisance reposted the pictures, she also asked followers if anyone could identify the teens.

“We would sure like to treat them to a treat on us!” Plaisance wrote. “What a wonderful positive story! Great job boys! This makes our hearts happy!”

The boys were soon tracked down by Tery Gomez, the elderly man’s daughter. She brought her father to be reunited with the teens on April 3 at The Sweet Spot Bakery, where the group was treated to a sugary feast. 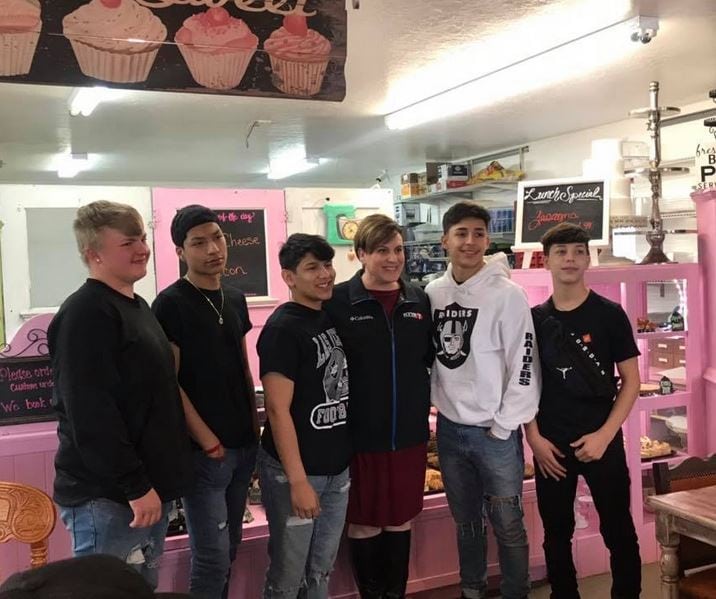 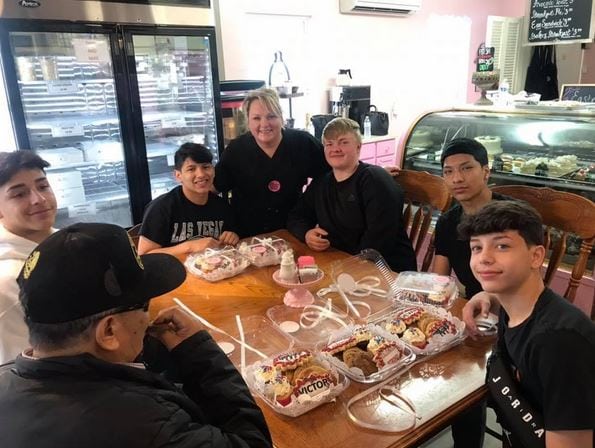 The boys were also showered with donated thank-you gifts, including food, massages and haircuts, collected from area businesses and handed out by Gomez’s grateful daughter.

“Caldwell is kind of seen in the negative most of the time and this is beyond positive,” she said. “We have some great things happening in Caldwell. So everyone wanted to show some love to the boys.”

Perhaps no one was more grateful than Gomez himself, though. He made the trip to the bakery just to thank the boys. “I was walking just right, and then suddenly I went down,” he told ABC 10. “And then they come over and they [said], ‘You want us to take you to your room?’ So I said, ‘OK, let’s go.’ It made me feel good.”

The boys told KTVB-TV they were shocked the post went viral on Facebook, but they didn’t jump in to help Gomez for attention or recognition. “We did it to help someone out,” they said. “It’s just the right thing to do.”

They also admitted that they still go visit Gomez to check up on him. “They remind me of myself when I was younger,” Gomez said.

But the teens are getting praised anyway, especially by their mothers. “So proud of you boys! Love you,” Hernandez’s mother, Rosanne, wrote on Facebook.

Some of the moms even reached out to Tovar to thank her for sharing the photos. “It would be awesome for the boys to meet you,” wrote Jeana Ornelas, mom of one of the teens, to Tovar.

“It touched my heart how caring these boys are,” Tovar told Yahoo Lifestyle of her decision to share the good deed. “I wanted my Facebook friends to see. But I didn’t think it would go viral!”

Be kind today! If someone needs help, be the person that changes their day!